A Persian Allegory of the Cave

Should you ever want to delve into the issue of censorship in Iranian Art, bring a strong flashlight, as you will realise that you are entering a domain that resembles the deepest caves on Earth, and where only the most adventurous dare enter.. You should be prepared to undertake your journey with a leap of faith into the void, for you are to discover a tormented labyrinth of endless hidden passages, the nature of which you will fathom only if you are not afraid of shadows: some are thousands of years old and stem from the primeval layers of the human psyche.

Over the last couple of months, as an Iranian painter myself, I attempted to interview a wide range of my fellow Iranian artists to complete my own views on the subject. Young or old, female or male, living inside Iran or part of the Diaspora, they all had given the matter of censorship some thought at some stage of their own creative process. However the answers were so identical both in content and with almost equal wording, that I felt ill at ease from the onset.

What is it about censorship that produces almost the same answer in such diverse individuals? Are they being honest or are they afraid to look into themselves to really determine how free they are in their visual expression?

To start with, one can count on certain given facts. The Islamic Republic of Iran prohibits a list of subject matters in the public arena: the naked body, sex, criticism or protest against the authorities or the religion… as it is expected. But then if you look back to previous eras of Iranian history, you will find that seemingly prohibited subjects matters are intrinsically part of its vast cultural inheritance. In fact, aside from very exceptional and few parentheses, one can only ascertain the Islamic influence on the culture of Iran. For many centuries the Fine Arts (crafts not included) have been a very restricted creative field and traditionally considered a secondary art form to Music, Architecture, Poetry or Calligraphy.

In Iran, the set of restrictions imposed upon the artists, some well defined and many inferred, are based on a set of rules established by the Ministry of Culture and Islamic Guidance that rely on a tacit sense of responsibility from the Iranian artist. This often results in a cat and mouse game between censor and artist and influences the creative expressions into amazing approaches to evade or curb the final censorship while staying true to one’s techniques, emotions and message.

Within this general framework and along with the rest of what used to be called the third world, generations of twentieth century Iranians have experienced an intense identity crisis progressively accelerated by Globalisation and the use of modern technology. Shaking their traditional roots at the heart, the intensity of this crisis has marked all aspects of contemporary Iranian culture while a series of violent political and social upheavals have prevented the establishment of a stable structure.

This lack of stability present in our times and the experience of velocity in our urban lives define the prevailing Iranian artistic currents, and explain the uniformity of response amongst artists when asked about the role of censorship. The more an artist considers outer elements to the Self for the pursuit of his activity, the more he becomes alienated. One can observe this alienation and pathos in all shapes and forms of contemporary Iranian Art.

Destruction, psychological violence or despair are sources of projections. They create a craving for escape, for glitter and as I speak now, unsurprisingly the major form of censorship in Iranian Art comes from the impositions of a newly born lucrative market for very rich speculators who are very poor in art education. This speculative market recreates a context for contemporary Iranian artists, which is not so different from other parts of the world.

The need for approval and recognition are so strong in Iranian society that it can be the cause for powerful unconscious limitations on authentic creativity. This social burden also favours self-censorship and an automatic repression of the artistic expression, cornering the latter into the darkest alleys of the human mind and psyche. Some artists may not realise how enslaved they are to the demands of a consumer society, its labelling, its marketing devices and its pressing expectation for “products”. They might also ignore that the most clever copy-paste piece will still transpire a form of unbearable angst that goes hand in hand with a lack of authenticity. By mimicking the art of New York or Berlin some Iranian artists limit themselves to become a passing parody.

At that point the artist who functions according to the trends and the requirements of a given market, and who pursues success or instant gratification, will barely succeed in emulating an image of himself; by measuring his worth to what sells, he will artificially wrap himself inside the veils of an exotic parody… Unless he also operates as his own critic, he will end up as a prey to superficiality and the narcissistic delusion of egotisms.

The social pathos as described above induces much confusion in people’s minds at the same time as its tensions are now reaching a head to such an extent that some artists at work feel in a way propelled out of themselves.

After analysis and pondering, it even seems like despite their ongoing chaotic environment, Iranian artists are challenged to reach out for something ‘bigger’ than this existing market if not more ‘human’. The price they’d have to pay is higher of course, and necessitates an almost heroic outpour of creative energy. In a culture accustomed to martyrdom, some artists may have to forego a sense of Fate, Loss or Nostalgia, to preserve the hope for a day when they can finally reach the very shore that several generations have struggled to find before them.

On that path we may also luckily and unexpectedly topple upon the Mystic, the free spirit who lives by his own sense of time and is harmoniously engaged on an independent inner journey in resonance with a long established Sufi tradition in Iranian culture. When treated as a private matter and at a distance from the outer ebbs and flows, doesn’t Art offer Freedom? Doesn’t it allow for Sublimation?

In that instance the artist as Mystic cannot count on guarantees, but his own desire for the piercing Light. His process may lead us on a bridge to invisible realms and open our minds to unknown levels of consciousness. He may become a saving grace for coming generations and our vehicle for a liberating Joy. He may transform our perceptions of reality and bring forth the best in us. 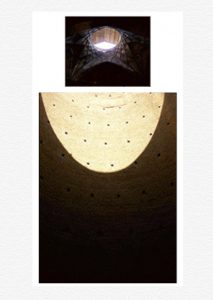