Alaleh Alamir : Transcendence and Immanence
When one turns to someone like Alaleh Alamir, it would seem that one has entered a different and entirely unrelated world to that of Katouzian. Few of her paintings appear realist in style and fewer still operate in the language of figure painting (1) – the dialect spoken so fluently by Katouzian, even when he provides it with a surreal inflection. Instead, Alamir is a decidedly modernist artist, evoking comparison to artists such as Mark Rothko, Robert Ryman, Ad Reinhardt and Yves Klein due to her use of vast fields of color. Nonetheless, it is misleading to see no connection between issues raised by Katouzian and Alamir respectively.

If Katouzian shows an Iran in which the self or individual is lost into the Utopian mass – a groundless reality that destroys identity -, then Alamir shows what it means to maintain the self in isolation from everything one once called home, to maintain one s identity in the face of loss. This is the situation of Exile (2). Indeed Alaleh Alamir was born in Tehran, the daughter of a liberal journalist under the Shah s regime. When the Revolution came in 1979, Alamir was 20 years old and away at university in the United States. She has since lived not only in the United States, but also in the Caribbean, Spain, France and India. Yet, it would be a mistake to understand Exile primarily in terms of geography; it is instead a way of being in the world.

Let us pursue this through an examination of two themes that repeatedly appear in Alamir s corpus: the dynamic, indeed dialectical, relation between Light and Nature. When one speaks of Light in this context, it is not lighting, or the shading of a figure, the play of sunlight across a room, etc. that Alamir has in mind. There are more appropriate media than painting to explore this approach to light in the modern context (3). Instead it is light itself. Painting must express itself in a way that is appropriate to its context and this must include a faithfulness to the possibilities of the moment in which it is undertaken. For Alamir then, painting must forgo all commitment to a particular style and reveal a pure experience of light itself.

But this is where one begins to make a dialectical turn that leads one deeper and deeper into an experience of Nature. Light, pure Light, is invisible. It is not seen, but is instead the unseen field within which sight happens. In order for Light to appear, it must be reflected or bent. In this way Light both illuminates and reveals itself in Nature, in matter.

Taken at its most literal, or perhaps more accurately, at its most figurative, since attention to the figure is something that must pass away, one can understand those places in her wide array of works where she appears at her most realistic. One might think of Madar (2001) in which an accompanying poem describes the mud-covered body as broken fragments of light that would otherwise have remained silent. Yet, if Light leads to Nature, one must never forget that Nature leads back beyond itself towards Light. This seems to be the clear implication of Les Heures (1989-present) and La Seine (1997). Les Heures is a collection of skyscapes, painted in various locations Alamir has lived and visited (4). Begun in 1989 it now contains more than 40 panels. As a subject the sky is presented as the source of Light in its various modes, from morning to night. This is shown primarily in terms of vast fields of color that dominate each individual panel. But the panels are then grouped together to provide a dynamic experience of Light in its motion, its self-revelation. The polyptych invites one towards an impossible experience of light in its infinity. This experience extended in La Seine, where the river appears as merely a band amidst two other bands of color.

Slowly one is being drawn beyond the appearance to that by which all appearance is given. This borders upon the mystical and the movement reaches its consummation in a piece like Chorro (1995). Here Alamir s work reveals itself for the truth of what it is: prayer. The viewer is called upon to meditate upon the relations between transcendence and materiality, the divine and finitude. She attempts to lead one toward that which, precisely, cannot be seen. At the moment in which she invokes the Invisible (envisaged as Light), she reminds that it is only revealed in its coming to materiality or Nature. In response the matter of her art strives to overcome itself, its limitations and to breakthrough (chorro): drawn out of itself by the Light through which it is able to appear at all. In short, Alamir’s work decries the forces which alienates humanity from nature, itself and God, and traces the path by which humanity is driven to overcome that alienation. The loss of one s home, by political and social forces beyond the control of the individual is transformed into a new kind of homelessness, identified at the beginning of this section as Exile, which is not nostalgic, but takes the viewer, beyond any comfortable sense of home, self or identity, on a pilgrimage toward Light.

By way of conclusion recall that Alamir’s vision already depends on a strong sense of self and perhaps even the modern state: a recognition of the limits of these that is at once paired in her work, with a refusal to regress behind them. But it precisely because of this recognition and refusal that Maleki’s project may well be the correct one for the artist who finds themself in Iran. Nearly two decades after the revolutionary fervor and the loss of individual identity of a people into the Republic’s sense of a national identity, Maleki must first rebuild the individual self and its freedoms before one can take up the task of pursuing the transcendent. 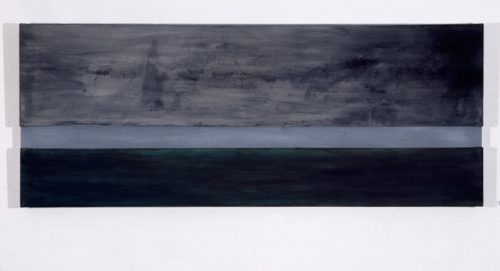 (1) One very notable exception is Self-Portrait (1989), a series of 28 charcoal drawings of the artist. But even here one should also note the way in which the piece resists interpretation as a typical self-portrait since instead of a single image of the artist the artist reveals the complexities of the self by multiplying the ways in which she portrays herself and by using a variety of styles by which to portray herself.

(2) Let us also note two points concerning Alamir s work which cannot be developed further within the confines of this essay. First, painting is only one of many media within which Alamir pursues her vision. Beyond paint, she is also a multi-media, poet and has worked on stage. Her poetry is indicative of the universality of her vision (an idea that this essay will attempt to develop in a limited way) and the way she wrestles with the inadequacies of language in the attempt to express this universality, approaching her topics in English, French, Spanish and her native Persian. Second, it is important to keep in mind with Alamir, but also the other artists discussed in this essay, that as important as the Revolution is for understanding Iran and its intellectual and cultural output over the last three decades, it would be a gross oversimplification to think that any of these artists can be interpreted as merely reacting to the Revolution. Any art that could be reduced to the Revolution would be propaganda or ideology. Instead one should see the Revolution as opening a horizon against which these artists pursue larger questions raised by their historical moment.

(3) As will be mentioned in the final section of the essay, the camera has certainly changed the context and meaning of painting in a significant way and it is impossible to ignore the existence of the camera and its easy adaptation to certain digital media. And certainly Alamir turns to the camera from time to time. But, perhaps more importantly, Alamir has approached the issue of natural lighting in a very direct way. Her installation, Aqua-Iris (1999) for example, made up of pigmented waters, drew the viewers attention to the way sunlight entered the room and the reflection of light off the sculpture and across the room.

(4) Les Heures also bears a clear connection with a pair of paintings of the night sky, Luna Nueva (1992) and Luna Llena (1991), where the necessity of matter for Light s self-revelation is strongly emphasized by the figure of the moon.

The connection between individual identity and isolation has necessarily remained an underexplored presupposition in this essay. One should point out, by way of further direction and a conclusion, that Exile is hardly an isolated phenomena and indeed it may well be the case that whole forms of cultural-political organization, especially political Liberalism, are in fact expressions of what we have been calling Exile: the forging and maintenance of the identity of the self which creates a reciprocal isolation from others and a desire for transcendence or wholeness which would overcome the isolation of individuality.

(excerpt from “The Makings and Unmakings of the Self in Contemporary Iranian Painting” by Robert Lawrence, published in NUKTA art magazine , Fall 2007)